Army Challenge Coins have a long and proud tradition going back to World War I. A time where there was no US Airforce, only the United States Army Air Service. This is the most popular and widespread story and one that is part of challenge coin lore.

During World War I a new type of combat emerged. Air warfare was its name and the Army created flying squadrons made up by volunteer pilots to forge a new path in modern warfare. Pilots volunteered from all walks of life, but mostly were made up by wealthy Ivy League students drawn by adventure of flight and a fierce love for freedom.

An Ivy League Lieutenant who wanted his squadron to have a memento of their service together ordered solid-bronze coins which he presented to his squadron. The bronze unit coins were gold plated and struck with the squadron’s insignia making a very valuable keepsake. Little did he know that one of his pilots would live through a dangerous encounter and alter the way Army Soldiers greet each other at bars and drinking holes around the world. The pilot wanted to keep his unit coin safe so he put it in a pouch he wore around his neck. A short time later his aircraft was heavily damaged by German ground fire and he was forced to land behind enemy lines. Germans quickly captured him and confiscated all of the pilots belongings except for the pouch they missed around his neck.

On his way to a prisoner of war facility he was held overnight in French village the Germans had captured. That night Allies bombed the village giving the young pilot a chance to escape.Fortune would smile on this daring pilot as German patrols were sent out to look for their escaped prisoner of war. The pilot “acquired” civilian clothes and did his best to blend in and escape detection. Moving through the dreaded “No Man’s Land” of the wars front lines he stumbled upon a French Patrol. As fate would have it the French were on the lookout for German saboteurs dressed like civilians and detained the pilot with the intent to execute him.

Just in time, he remembered his leather pouch containing his military coin. He showed the coin to his would-be executioners. His French captors recognized the squadron insignia on the coin and delayed the execution long enough for him to confirm his identity. Instead of shooting him, they gave him a bottle of wine. Once the pilot safely returned to his squadron, it became a tradition for all members to carry their coin at all times.

To ensure compliance, the pilots would challenge each other to produce the coin. 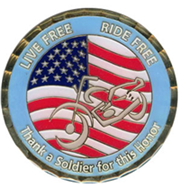 If the challenged couldn’t produce the coin, he was required to buy a drink of choice for the challenger; if the challenged could produce the coin, the challenger would purchase the drink. Each Army Unit has their own rules for the game and the commanding officer can alter these rules accordingly. Some units you can produce any coin, while other units demand that only the coin for the unit you are serving in will suffice. Other units have very strict rules but one rule is still followed. Upon reception of a coin the coin rules must be given and revealed to it’s new owner. Overtime it developed into the challenge coin game played in watering holes throughout the armed forces. Challenge Coins soon became a tradition in the Army and spread to the other branches of service. Enlisted clubs would never be the same and many soldiers loved sipping down a free drink and explaining to the other services why they were buying.

During World War II challenge coins again proved their worth in identifying friendly personnel from “Nazi Infiltrators”. Members of the Office of Strategic Services who were deployed in Nazi held France were issued coins known as “Bona Fides” during meetings to verify a person’s identity. Certain aspects of the coin in the meeting were inspected such as the type of coin, date on the coin to ensure the meetings were not compromised. By using the coins it ensured that no spy that had knowledge of the meeting times and place could infiltrate the group and report their findings back to Germany.
During the Pacific campaign an American Army officer that was to make contact with a Philippine guerilla group was given a special silver coin that was stamped with their unit insignia to ensure proper verification. After the guerilla group verified he was their valid contact they went on a daring raid of a Japanese supply depot with success.

The oldest challenge coin known in existence is that of the 17th Infantry of Korea commanded by COL “Buffalo Bill” Quinn. These coins were made during the Korean War and were given to its members from 1950 to 1951 to mark their tour together. On one side of the coin is a picture of a buffalo with the date 1812, which signified the year the unit was formed. On the other side was the 17th Infantry patch with the dates 1950 – 1951 and the word Korea to signify the tour.

In another popular story the oldest special forces unit in the Army, the 10th Special Forces Group had coins created for their entire unit to prove membership since it seemed everyone was claiming to belong to this elite unit. If you were telling a story about your time in the unit and could not produce your coin to prove it, the soldier had to pay for a round of drinks and was escorted off the premises.

In modern times Army challenge coins are presented to unit members and special visiting officials to show appreciation for their support, a job well done, boost morale and to reward service members for going above and beyond their peers.

Challenge coins today have spread to other military units and every branch of the service. Airmen upon graduating from the Air Forces top schools are presented a coin and in the Marine Corps the “Commandants Coin” is the most sought after coin for display.

It wasn’t long before fire and police departments picked up this tradition and started issues their own challenge coins for their members. Soon government officials started to use challenge coins as a way to boost morale and as fundraisers for special occasions. Even the White House has had presidential coins minted for each incoming president dating back to Ronald Reagan’s time in office.

Collecting coins has become a way of life for some and a great conversation piece for others. Each coin has a story. Each story has a way of making former services member remember their time spent in a unit or relive their deeds or actions done. The challenge coin is not a mere token but a source of pride for today’s warriors at any level, whether that be enlisted or officer.