Military challenge coins go by many different names, and come on many different shapes. Some names include unit coins, commander’s coins, military coins and more. As for challenge coin shapes, there is really no limit, from shields and arrowheads, to dog tags or stars.  No matter the name or shape, the challenge coins identify a soldier as a member of a unit and is seen as a symbol of pride, respect, and fellowship. Today, most military units create their own coins, which every member carries that received one as part of the unit.

The history of challenge coins being used as medallions and rewards for service or identification date back to as early as Ancient Rome. If a soldier performed well in battle he would receive a normal day’s pay and an extra special coin. Some sources say the coin was made with the mark of the soldier’s legion, which would encourage him to keep the coin as a memento rather than spend it. These days, the coins cannot be spent, so soldiers keep them as tokens or rewards for a job well done, especially those from a military operation. Many administrators use coins like business cards or autographs for their collection, as well as challenge coins soldiers can use as an ID badge to show they served with a particular military unit. 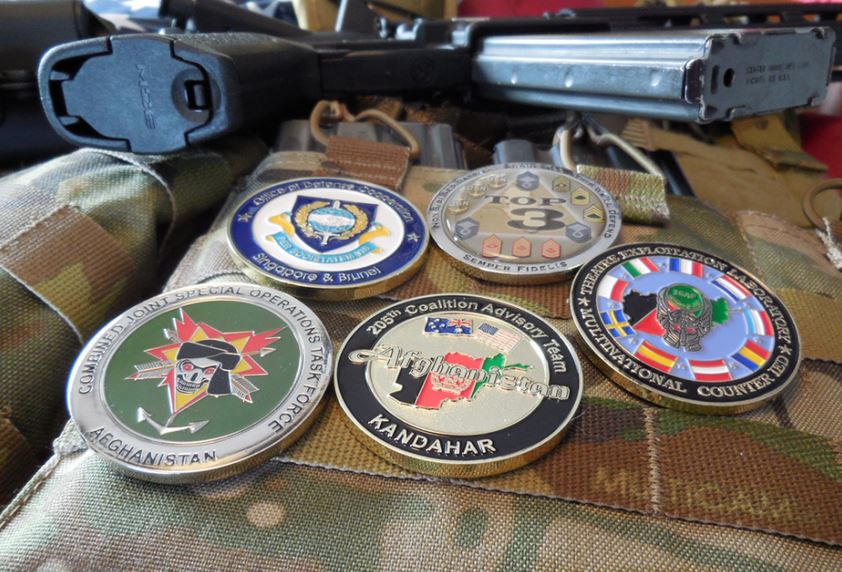 Even though no one knows exactly how or when challenge coins were made, there is one story from World War I, about a pilot shot down over Germany. A commanding officer had bronze coins made with the unit’s insignia printed on them to hand out to his men. Shortly after, an officer was shot down and captured in Germany. After he was captured, the Germans took all of his possessions except his coin, which was in a small leather pouch around his neck. The pilot managed to escape the prison and make his way to France, but the French thought he was a German spy. The French sentenced him to execution, but he proved his identity by presenting the medallion. One of the French soldiers recognized the insignia on the coin and the execution was delayed until the pilot’s identity was confirmed, and he was returned to his unit. Another early design of the challenge coin, designed by “Buffalo Bill”, which he made for his soldiers during the Korean War in the 1950’s, featured a buffalo on one side as a signature of its creator, and the units insignia on the other side.

The “challenge” part of the coins originates from a local German tradition called “pfennig checks.” The pfennig came shortly before the euro, and if you did not have any when the check got called, you had to buy all the beers for you and your friends. This most commonly happened shortly after World War I, but soon changed from a German pfennig into a “challenge coin.” Soldiers would challenge each other by slamming their coins onto the bar, but if you did not have one, you had to buy the beers. If everyone that is challenged has their coin, the challenger has to buy the drinks. This tradition continues on in most armed forces included the United States even today. Click on the link to learn more about Military Challenge Coins .